Just a thought the other day concerning food bank use in the UK...Are the governments purely to blame for their rise? I remember when my son was small and money was tight my parents helped out a lot with food. Is it possible that extended families live more separate lives often miles apart. Also has the encouragement to save for a rainy day been lost? Family economic priorities have also shifted with many locked in to phone contracts and media entertainment contracts that are not easy to get out of? 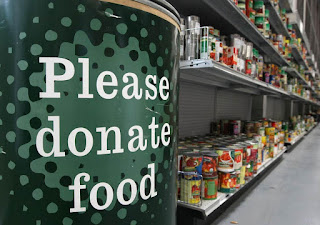 The previous Labour government stopped paying housing benefit direct to the Landlord and instead decided to pay it to the claimant. It was meant to empower people to budget but if you have very little money the temptation to spend the rent is a strong one! In the current system the landlord can request a direct payment but only after several months of arrears have accumulated. As a result many people are being evicted for non payment of rent and cannot be rehoused because they are seen to have made themselves homeless by not paying their rent!

This current governments Tax Credits, in some regard, seems brutal especially sanctions and the long wait to receive financial help. There will always be people in need as circumstances can change overnight, loss of work, ill health, breakdown of relationships etc. Perhaps food banks should be viewed as a welcome friend in need, funded and stocked by those within the local community who care and are pleased to have a avenue to show their concern in a practical way, rather than a embarrassment for the UK.

The Trussel Trust are campaigning to end the need for their food banks in the UK but through their charity work they are enabling families in need to come forward and request help without fear of refusal, judgement or prejudice which must be commended.
Posted by Shirley Worden at 17:31 No comments:

A private investigator claims he knows who really killed Nicole Kidman and Ron Goldman in 1994. I remember the OJ Simpson murder trial well. All the evidence seemed to point to him being at the crime scene and the killer of his ex-wife and her boyfriend and yet the jury found him not guilty. New evidence has been put forward that it was his son Jason who did the killings and OJ was only there to cover up his sons misdemeaner and take the rap.

As we draw closer to Easter another famous trial comes to mind. Jesus of Nazareth found himself before the Roman Governer Pontious Pilate accussed of stirring up the people and claiming to be a King. Pilate wanted to flog him and let him go but the vocal minority wanted him crucified. Desperate to release him Pilate reminded them at the Passover Feast it was their custom to have a prisoner released. Pilate gave them a choice, Barabbas or Jesus. They were both noteable prisoners, both accussed of inciting the people. However Jesus was declared Just by Pontious Pilate during his hand washing. Barabbas was a thief and a murderer. Interestingly Barabbas means 'son of the father.' Jesus was declared the Son of the Father but of a different father. Who would the people choose? Two sons one choice. We know they chose Barabbas.

I wonder how OJ and his son felt when the verdict was read out? If the allegations are true the wrong man stood trial. What of Barabbas? I bet he couldn't believe his good fortune. If he wasn't released that day he would have been put to death. An innocent man died in the place of a common criminal. And that my friends is the gospel message. Jesus died in our place so like Barabbas we can walk free. Unlike Barabbas who didn't have a say in the manner, we do. God has given everyone a free will to choose whose child they will be
Posted by Shirley Worden at 11:07 No comments: 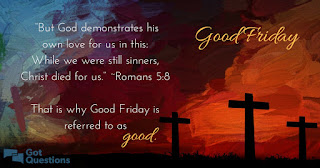 In Genesis 3:7 Adam and Eve tried to cover their sin with fig leaves. Nakedness was a word used in Hebrew thought to denote being found out - uncovered - sinful. When God saw them He could not accept their covering so animals were sacrificed and 'The Lord God made coats of skin and clothed them' Genesis 3:21. The Bible is not specific however most agree the animals would have been lambs or young sheep. Now rush forward a few thousand years and hear the words of John the Baptist on spotting Jesus "Behold the Lamb of God who takes away the sin of the world" John 1:29. However Jesus sacrifice on the cross didn't just Cover sin it took it away from all those who are trusting in Him for their salvation. Working for salvation by being good or doing good deeds are fig leaves and unacceptable to God. The only sacrifice God will accept to cover and takeaway our sin is the sacrifice of His Son in the work of the cross. This is why Good Friday is Good news to all those who believe!
Posted by Shirley Worden at 08:41 No comments: