Reach your community for Jesus this Easter

I received this unoffensive and people pleasing lingo in my e-mail box today. It's part of a Christian publicists Easter drive (CPO). It pretty much sums up were allot of the professing church is at the moment.

I have an alternative....

This is the message I shall be preaching this Easter and every Easter whilst God gives me breath. But that's not loving you say! But is it loving to hide from someone the truth of their prediciment before a just and righteous God and to withold the only means by which they might be saved? The Writer of Proverbs agrees, "A true witness delivers souls" Proverbs 14:25.
Posted by Shirley Worden at 08:04 No comments:

I found this report on Ian Paisleys oficial web-site. As he is a member of the E.U this report can be viewed as credible. The report is a few years old and I have been unable to verify whether this vacant seat still stands. Security measures does not alow a seating plan to be available to the general public.


The Vacant Seat Number 666 in the European Parliament

Report on the opening of the Fifth Elected Parliament of Europe in Strasbourg and its occupancy of the new Parliament Buildings.
Ian R.K: Paisley, M.P., M.E.P.

The recently elected Fifth Parliament of Europe met on Tuesday, 20th July, 1999, in its new glass building which cost the taxpayers of Europe an as yet uncalculated sum of billions of Pounds. The first meeting, due to begin at 10.00 a.m., did not start until 10.30 because the amplification system, which cost millions of Pounds, was defective. No doubt more defects in this Crystal Palace will be manifested in the days to come.

Incidentally, the Members of the European Parliament had no say whatsoever in where the building was to be located, what its design was to be, what amount of money was to be spent on it, or how it was to be furnished. The French Government forced it both upon Members of Parliament and upon the Governments of European Union countries, Germany and the United Kingdom being made to foot the exorbitant bill. These two countries are Europe's pay slaves.

The prophetic significance of the European Union has been revealed as the saga unfolds. [See our two articles on "The Conspiracy behind the European Union".] First, the sign which it chose as its symbol was the Woman riding the Beast. This comes from a prophecy in Revelation 17. The depiction of the harlot woman was reproduced on the centenary stamp of the European Union, in a huge painting in the Parliament's new building in Brussels, and by a huge sculpture outside the new E.U. Council of Ministers Office in Brussels. The new European coinage, the Euro, bears the same insignia. The Tower of Babel has been used on the posters emanating from Europe – a truly suggestive prophetic sign.

It is certainly a building of the Space Age. The seats of its massive hemicycle are designed like the crew seats in the Star Trek space machines. There are 679 of them – but wait for it! While these seats are allocated to Members, one seat remains unallocated and unoccupied. The number of that seat is 666. The relevant section of the seating-plan provided to each Member reads as follows:

Revelation 13:18: "Here is wisdom. Let him that hath understanding count the number of the beast: for it is the number of a man; and his number is Six hundred threescore and six." That is 666.

Today this scripture is being fulfilled before our very eyes.

The Antichrist's seat will be occupied. The world awaits his full and final development. The Lord will destroy him by the spirit of His mouth (the Word of God) and by the brightness of His coming (2 Thes. 2:8). The coming of the Lord draweth nigh.
Posted by Shirley Worden at 12:22 1 comment:

Persecution In The News 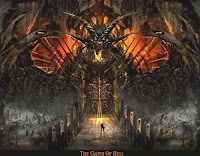 Once again UK news agencys report the story of Christian 'Persecution.' This time a five year old was the cause. The child told a fellow pupil what would happen to her if she didn't believe in Jesus. Hell was mentioned, and as we know the lost are offended at the very mention of coming judgement, whatever the age. Interestingly the very same thing happened to my daughter. She told her fellow pupil the same thing. She then went home and asked her mummy if hell was real. Her mother made a complaint to the teacher who reprimanded my daughter. I was upset on the grounds that every human being has the right to express their faith and I doubted whether the same fuss would have been made if my daughter was a Muslim! However I did not contact the press or e-mail all my Christian friends. I accepted that this was part of 'Being a Christian' and went to the Lord for my guidance(He is the expert on handling rejection and persection). There are thousands languishing in prisons with no media to court and have the Lord and him only to rely on. Christians must not peddle equiality in faith. We can never be equal with other faiths. Persecution is inevitable, let us rejoice when it happens and question our Kingdom activity when it doesn't.
Posted by Shirley Worden at 18:56 No comments:

I was recently disturbed by the commentary of one who worked in the field of the persecuted church. They spoke for twenty minutes on the works of the enemy; rape, imprisoment,torture and the like. I pressed for a testimony of what Jesus was doing.
Eventually I got something, but my gut said the balance was wrong.I was further alarmed when fear was further pressed in "Persecution is coming." Jesus warned and encouraged with both hands "You shall have tribulation: but be of good cheer; I have overcome the world" John 17:33. Beware of those who instill a spirit of fear. "For God has not given us a spirit of fear, but of Love, power and a sound mind" 2Tim 1:7.
Let us continue to encourage the saints in the work of the ministry.God has the victory. We are a victorious people. Let us walk in that knowledge.
Posted by Shirley Worden at 18:36 No comments:

It came to my thoughts how truly devisive the word of God is. We read in the opening verses of Genesis that God divided and separated, by his word. We see God dividng and separating a people unto himself through the calling of the Israelites, by his word. We read Jesus declaring the continuation of this work by his word "Think not that I come to send peace on earth: I came not to send peace, but a sword." Matthew 10:34. This weapon is the deadliest of them all.."For the word of God is alive, active and sharper than any a two edged sword.... dividing asunder and diserning the thoughts and intents of the heart" Hebrews 4:12. Quote Gods word to any soul and you will quickly discover, there our no fence sitters. Gods word is like a surgeons knife it exposes the diseases of rebellion, sin, pride and hatred. I was a member of a small group a little while back that was instructed by a well meaning but ignorant fellow "When witnessing never say; "The Bible sais!" My immediate thought was who in their right mind would go into a war zone and leave his weapon behind? Any soul who attempts to witness without using the authority of Gods word is going into battle unarmed and will be carved up. A say a battle because when we go for souls we go head to head with the flesh, the world and Satan. Praise God scripture declares God's word has victory over all three. However God instructs us through his word to rightly divide it and .."Study to show ourselves approved of God,a workman that need not be ashamed" 2 Timothy 2:15. Like any good sword handler you must know when to use it defensively, offensively and even when to temporarily place it back in its holder. There are some who haven't got the stomach for the battle, like the false Prophets of old they call a truce and declare peace when there is none and uphold a false unity that has not been brought about by the Holy Spirit. History records many who got into bed with their enemy hoping for an easier ride, their folly evident to all. As the days get darker the separation and division will undoubtably intensify. The proclamation of Gods word amongst the masses has never been popular, but thank God he hasn't called us to be popular.
Posted by Shirley Worden at 13:06 No comments:

People Of Faith Fear Not

As a bank nurse is suspended for offering prayer to a patient it would be so easy to respond in a knee-jerk fashion. Unfortunatly this is being used by some to highlight the apparent unfair treatment Christians receive. I say unfortunatly because suffering for our faith and facing hardships has prety much baulked at by the seeker friendly churches who promise financial blessing and life enhancement instead of what Jesus said we would recieve. Wisdom needs to be applied here. I would not advocate witnessing to anyone on 'Bosses Time' however there are opportunities during lunch breaks etc. to share your faith. As this affair is being looked at by a Christian legal team hopefully it will bring clarification to the issue. However the whole affair may highlight a human rights issue which grants each individual the right to express his or own own faith. Be encouraged, God has not given us the spirit of fear but of power, love and a sound mind. Let us continue to step out for Christ and if we receive a bit of flack along the way, lets rejoice because 'Great is our reward in heaven.'
Posted by Shirley Worden at 10:39 No comments: